In my recent “New decisions” post I mentioned that a Claret Brompton (one of the colour choices that have just been replaced in the new colours range) was on its way to Australia in the next shipment – & it would be coming my way! Well, it’s happened & after Brompton’s Elves prepped it, yesterday “Clarence” arrived via a special courier delivery to supplement the Brompton family! 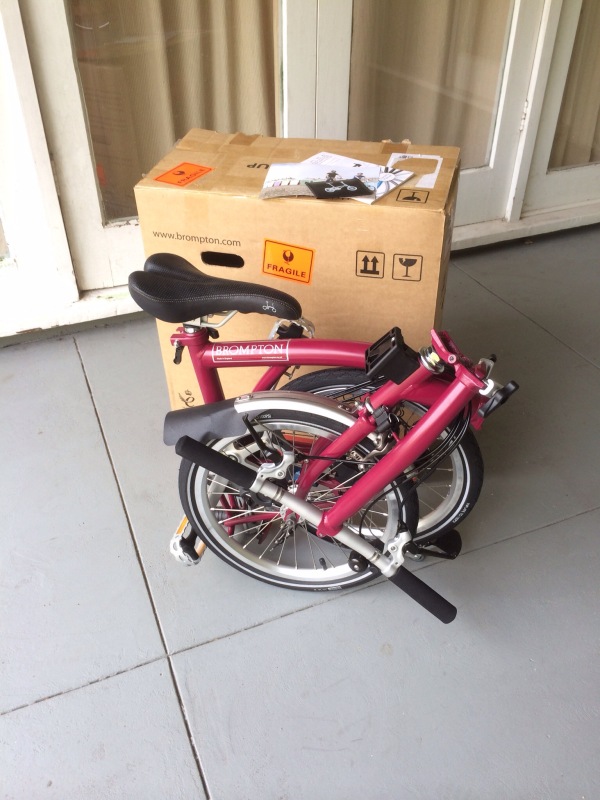 The BAC weekend promised/included lots of tidbits & treats. The first was a “Welcome to Sydney” ride on the Saturday.

As the invitation email stated –
“If you’re travelling from interstate or overseas to race, or you’re a local, we’d like to welcome everyone to Sydney with a ride and get-together.
We’ll be meeting at Cheeky Transport, 3a Georgina St Newtown at 4pm on Saturday the 18th, and riding to Batty St Park at Rozelle for fantastic pizza from Rosso Pomodoro and drinks from the Bald Rock Hotel, and a glorious view over the harbour and city as the sun sets.”

I don’t know how Brompton Australia do it? Everything stated above came off well, on a day of lovely weather. We met at CheekyT, chatted & kicked tyres endlessly until Adam led us through quiet back streets, lanes, cycle paths & bush tracks (I kid you not! How does he find them?). A convoy of about 30 Bromptons certainly got some attention through all the trails, with people stepping back to watch us glide through. Knowing our destination, didn’t help me determine where I was at any time; we were on a Brompton magical mystery tour.

Arriving at the park just started the next phase of chats but this time on a grassy knoll overlooking waterfront sights towards the city. With such distractions I was oblivious to the beer delivery until an opened bottle was waved under my nose. Shortly after, a pile of pizza boxes appeared & we all tucked in. With a fine array of empty & near-empty boxes, it was then that I remembered to take some pics!? Sadly there seemed little appropriate for the blog post so I apologise for my limited selection from the afternoon/evening – but then, similar difficulties arose on Saturday so maybe we need a “nominated photographer” for such gatherings? 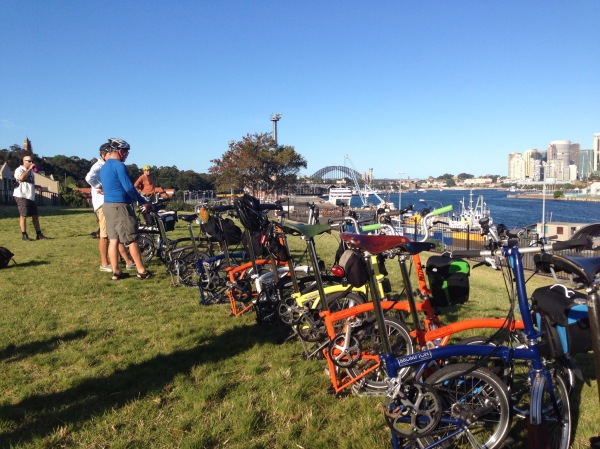 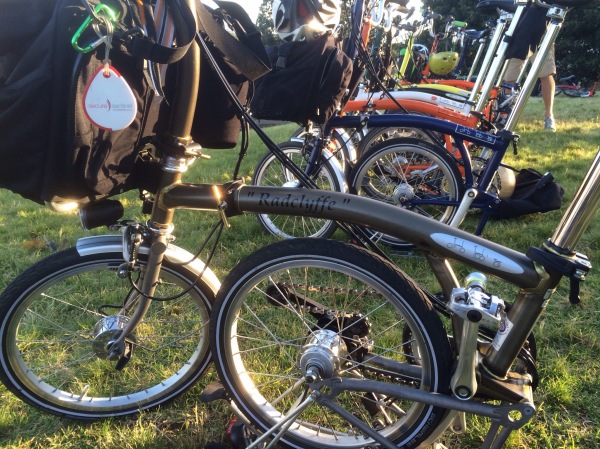 Sunset & a cooling breeze were successful in breaking up the party & we dispersed to all corners of Sydney, mindful of the big challenges that lay ahead for Sunday. Thank you Brompton Australia, CheekyT & all the entertaining Bromptonauts!

‘Twas such a blur & now just the memories ’til 2015? Of course I’m referring to “BAC day” (Brompton Australian Championships, 2014) & everything was fine (well, almost everything – as there was also that unfortunate event at the end of the day when Mrs Aussie parted company with Peregrine & managed to break her arm – refer earlier post “Peregrine down” & watch below for an update?)

Back to the fun part of the day, it started bright & sunny for our trip in the Tardis towards the Sydney Olympic Park venue & we parked in a nearby suburb to Brompt* the rest of the way. For a while we were mixed up in with some very tired looking riders who were participating in the Spring Cycle ride (& due to finish at SOP) & I expect our BAC attire was somewhat of a distraction? We headed straight to the Brompton registration tent to get our “goodies bag” & race numbers (the tent being easily located, owing to dozens of Bromptons in the vicinity?)

The inclusion of the BAC with the SOP cycling events was brilliant. Lots of activities, displays & food stalls for various happenings: eg 50km cross-city family rides finishing at the park & club cycling criterium races – including the Brompton race. The location of the Brompton tent & displays was ideal: close to tree shade & the cooling spray from the Olympic Fountain, adjacent to all displays & food. Perfect publicity positioning!?

“Serious chat time” with fellow attendees was all too short. There seemed to be many, many unfamiliar faces – although during the day I realised that some Brompton race outfits were more like disguises? “Next time” I shall look at trying to chat with everyone & I may even remember to take lots of pics? (yes, I admit to not getting very far – but I’ll try harder next year!?)

The summons to our “race briefing” reminded me about what we were there for, & seeing other cycle Crit races going on also revealed that I had the wrong circuit in mind?! An earlier Crit course had a been a loop around some of the roads with mostly right-angle turns & pavers along one section only. The latest course was almost an L-shape featuring 2 hairpin turns! Not as flowing a circuit but probably better for spectating (both beside the track & on-bike – where I would have the pleasure of seeing riders disappear into the distance, but watch for them coming back towards me from the major turns?) Refer map with course overlay in red –

My participation is in keeping with the race ideals, with attire, style & enjoyment to the fore & as usual, my racing would be at my rather slow pace! A max pace, mind you, but one that my restricted heart capacity would see me expecting to see lots of riders close-up – as they lapped me regularly? Our participation in the Brompton World Championship last year was a delight & an experience. Mixed up with nearly 700 Bromptons spread around the Goodwood Motor Circuit was a delight to the senses & an experience that suggested very careful consideration of the jacket portion of the required race attire? My traveling sports coat was quite comfortable but thoroughly unsuitable for ventilation. The wise heads would suggest an Op-shop jacket, stripped of its lining & even hacked open at the armpits? My search for a jacket for BAC 2014 was rather frustrating; nothing lightweight & stylish at Op-shops? on-line ordering totally baffling for size & likely weight? (After all, asking vendors for a jacket to suit BWC/BAC criteria is likely to be doomed? How about “stylish, light, cool, cheap & capable of coordination”?) When all seemed lost & about to revert to anything from the Op-shop situation, I found an outlet with my ideal: lightweight cotton, unlined, my size & discounted to the princely sum of $15 – magic! My ride would be complete!

I have to confess that I never expected BAC to eventuate! My observation/experience is that Australian & NSW Cycling organizing bodies are hopelessly rule-driven & inflexible & wouldn’t want to help out? Fortunately, kudos to Lidcome-Auburn Cycling Club & Park Bikes for allowing Brompton Australia to slot in a race during their Cycling Club Cup events at Sydney Olympic Park! Now, don’t interpret these comments as a complaint but the event plans were a touch confusing! Initially advised as 5 laps of a 1.72km course later became a Crit of 30mins + 1 lap & then finally at the race briefing, 6 laps of the Crit course?! No problems; we had a race!

After the race briefing we were guided onto the circuit to the point we would fold our Bromptons (about 65?), walk back down the track about 20 meters & await the start. In keeping with Brompton Championships, the race commenced from a LeMans start, running to our bikes & unfolding them before proceeding along the course. Of course the race format also included a style factor of “jacket & tie mandatory”. For reasons unknown to me, the race briefing included an opt-out for jacket wearing!? Yes, a warm day but not overly hot & many bounders took advantage of this weakening of dress rules! Just not cricket? 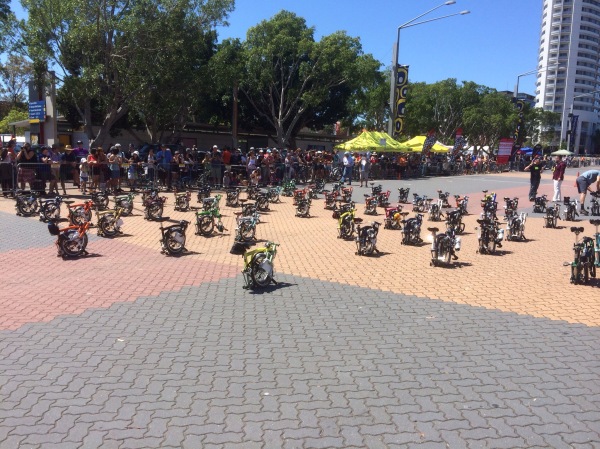 And so to the race… Not the greatest of unfolds for me but that’s definitely relative; some people needed assistance to finally get mobile? My race strategy was no different to other rides; pedal fast until leg fatigue forces me to back off a bit & then just keep going – & watch the action around me while staying out of the way? Do consistent timed laps but consider pulling out if my times drop away (for me, not a good idea to overdo things?). However, using my Garmin as my guide went awry! First, I forgot to reset it from the morning ride & had no idea of my first lap time. Then I found I couldn’t read the Garmin with it vibrating badly on the pavé along the start/finish area! Not only had I lost my lap-time references, I’d lost my lap counter. With lots of riders overtaking & the race update commentary over the PA system, I lost track of my laps & pulled off once the leaders had finished. Well, that’s my excuse for not doing all the laps (& unlike the BWC, I had no race-recorded time & no finisher’s medal to ride for). A very entertaining ride; I liked being able to see other riders & their Bromptons, both when being lapped & when coming back from the hairpin turns – & as you may notice in my YouTube video BAC 2014, my pace doesn’t trouble the leaders!

Yours truly, hard at work…

Of course, the post-race activities primarily involved chatting but also found time for a Brompton folding competition & the awards presentation.

A big thanks for the day to Brompton Australia, Kobie Cycling, LACC, Park Bikes & many hard working Bromptonauts (& to Bicycling Australia magazine & Mrs Aussie for some pics here?) 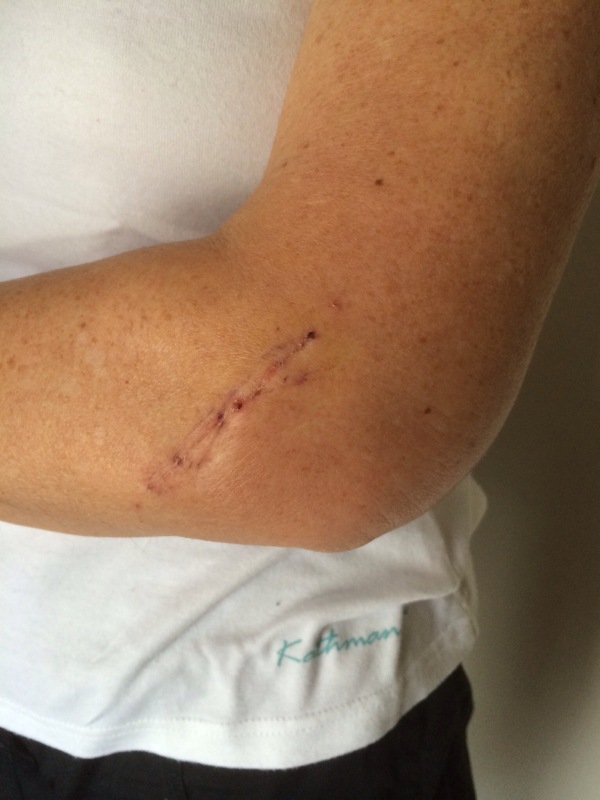 * Brompt – as in “to ride a Brompton” (per Mrs Aussie’s artwork setup for T-shirts, etc)