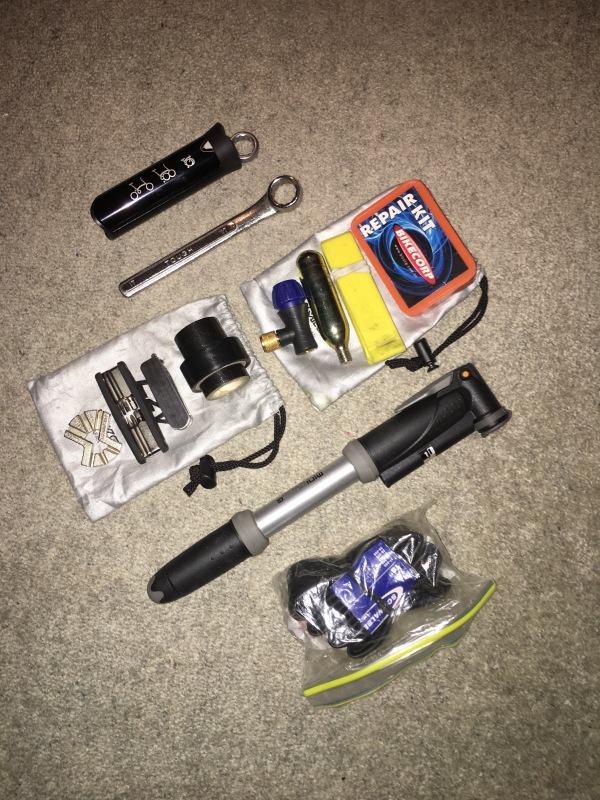 There’s a few new items that most Brompton owners wouldn’t include but you’ll probably pick them from the descriptions below.

Knowing Ralph-e was going to become considerably heavier after the electric conversion, & probably needing good stability when folded & rolling, in preparation I moved/robbed Robinson’s rear rack (after all, the rack weight was unlikely to be noticed on Ralph-e & Robinson’s role as “spare” would just as easily be accomplished as an M6L?). This turned out to be a very worthwhile operation. However, what I hadn’t anticipated was the borderline stability when Ralph-e was folded (especially with the luggage bag fitted). With the front wheel motor & battery weight concentrated outside the center-line of a folded Brompton, great care was needed to avoid toppling when transporting, etc. Seeing a BikeFun Eazy wheel extender on a Brompton at the Urban Challenge, what I may have considered as “functional bling” now leapt into mind as “essential function”? Sure enough, BikeFun’s brilliant gadget was right at home on Ralph-e & has quickly been integrated into the Brompton fold sequence (i.e. “Left pedal down, right wheel out, park, etc…”) 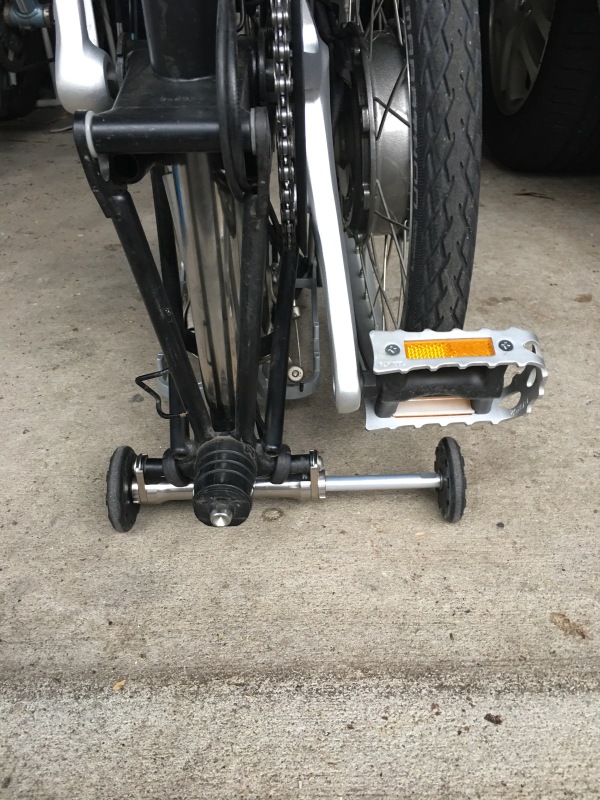 Two aspects of life with Ralph-e have been pleasing. Beforehand I’d wondered if the weight would be a concern when folding/handling/etc & I also pondered if converting my Alfine 11-speed Brompton was the thing to do? Sure I’d like less weight but I’m coping & learning more. The knack to folding the front wheel is first to anchor the bike down by putting my toes on the rack/left-side Eazy wheels & then grasp the handlebars by each grip & lift well up until the front wheel naturally pivots around under its own weight (& the same for unfolding, where the increased weight pivots the front wheel very readily). If/when I need to lift the folded bike, my right hand grasps the mainframe just behind where the front tyre is close to the frame & my left hand lightly holds the luggage bag handle for balance. (Leaving the bag on the bike saves the inconvenience of disconnecting the battery in the bag. I’ve seen systems that allow an automatic electrical disconnection through the luggage block; maybe one day but so far so good?)

My logic for converting the Alfine Brompton was somewhat guesswork. A brief test ride of a 6-speed Brompton fitted with a cadence-based pedal assist (not a torque sensing system that I was intending) showed the disadvantage of stopping pedaling to change gear; the power goes away & your next pedal action has to start the motor again. (Brompton hub gears don’t like gear changes with pedal load whereas the Alfine hub can change gears under load, allowing me to keep pedaling & just change up or down through the 11 gears as necessary.)

My medical condition necessitates low gearing on my Bromptons. 6-speed Clarence & Robinson both have 40T chainrings & Ralph-e’s Alfine 11-speed has a 44T chainring. Ralph-e has 2 gears lower than a “reduced” 44T Brompton’s lowest gear (3 lower than a standard 50T unit) & an upper gear equal to a 44T bike. Before the electric conversion, I would start changing down early at hills to minimise fatigue & maintain some momentum. Now I’m having to re-learn many riding strategies when I can ride harder in higher gears & then quickly change down as/when necessary. Ralph-e’s lowest gears are getting a lot less use & I’m constantly changing up & down through the gears. I’m also learning about the e-bike setup with a torque sensing bottom bracket (supplying power to the motor proportional to my pedaling load). For example, on a recent gradual small rise Mrs Aussie had been well ahead but I quickly caught back up when she naturally slowed on the hill. I assume that the increased pedal pressure on the hill had the torque sensor supplying more power & I was accelerating up the hill while just maintaining my cadence? (A bigger hill would have seen me increasing my effort & changing down but this time I had a “magic carpet” sensation?) Every ride is a delight, with the power feeling smooth & natural with just my pedaling – “as it used to feel but now even better?”

Another aspect of the pre-conversion conundrum was Pedelec vs Throttle. I wanted to be able to ride my bike as naturally as possible & preferred to avoid using a throttle (assuming it to lessen the natural riding experience, although the sensation of opening a throttle & enjoying a surge of power is very appealing?). As such, I liked the theory of a torque sensing pedal assist, (as compared to the straight-out cadence measuring system) & thought I could get by without combining it with a throttle. During my first days with Ralph-e & experiencing big hills, I temporarily fitted the throttle supplied with the conversion kit, to see if it was going to help. I found that it didn’t provide any more power from the motor over what pedaling was achieving (& that pedaling was essential, rather than expect to ride on throttle alone!). The throttle is now consigned to the luggage bag, just in case the TDCM bottom bracket should fail far from home?

Interestingly, my brief test rides with various throttle systems has shown quite some differences. I don’t just mean thumb-control vs twist-grip; factors such as smoothness, sensitivity & effort were all on display. Also, the ergonomics come into play when some bike setups require a throttle on the left. One aspect for me about using a throttle, is that I would be using it everywhere; I need the motor on flats as well as hills (unlike some riders who would just use a throttle to help the effort on hills). I’m kind of glad I’m not having to choose or depend on a throttle?

Seeing over 20 events in the 2016 Sydney Rides Festival brochure for much of October, my measly take-up doesn’t seem worthy? On the other hand, a lot aren’t so relevant for me: Ride to work? Cyclocross? Bike Polo? Hill climb? etc. Even the Chocolate Ride didn’t drag me in (yes, I couldn’t trust myself) & the timing or proximity for some didn’t fit.

Doing the Brompton Urban Challenge was probably the highlight & our pre-arranged team (Mrs Aussie & myself, along with “master navigator” Mark) was keen. Armed with our guidelines & clue sheet, we/Mark engineered a route around the city & inner surrounds to achieve our tasks over 4 hours or so before we were due at the presentation meet-up area. (team pic courtesy of another Mark?) 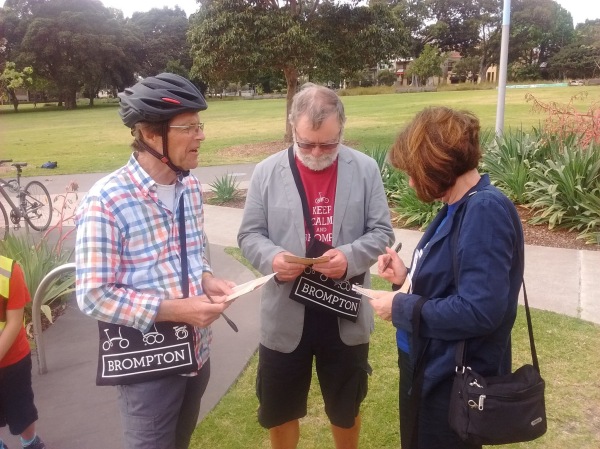 The delights of getting around the city on mostly car-free routes on our Bromptons was the big reward from the Urban Challenge. (The fact that it was our only reward didn’t matter, honestly! Perhaps our pics lacked a tad craziness? (read “youthful exuberance”?) Maybe next year?) As with all Brompton gatherings, the socialising-time at the presentation area was all too short. The Brompton folding competition, the food trucks, the other bike happenings; all great entertainment. Thanks organisers, thanks participants. 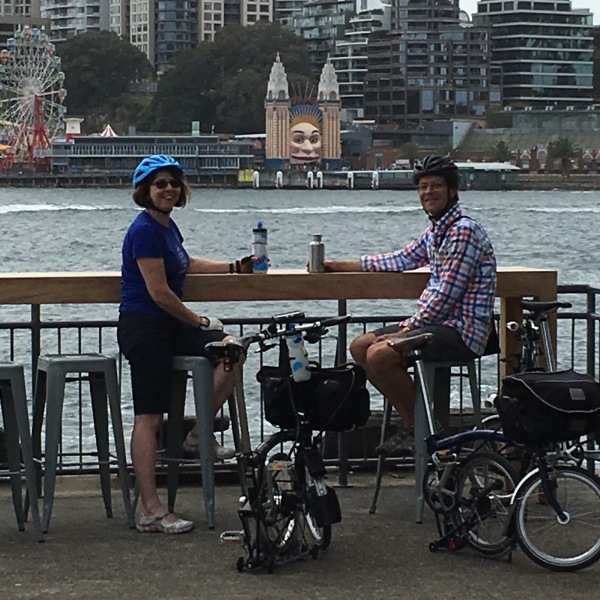 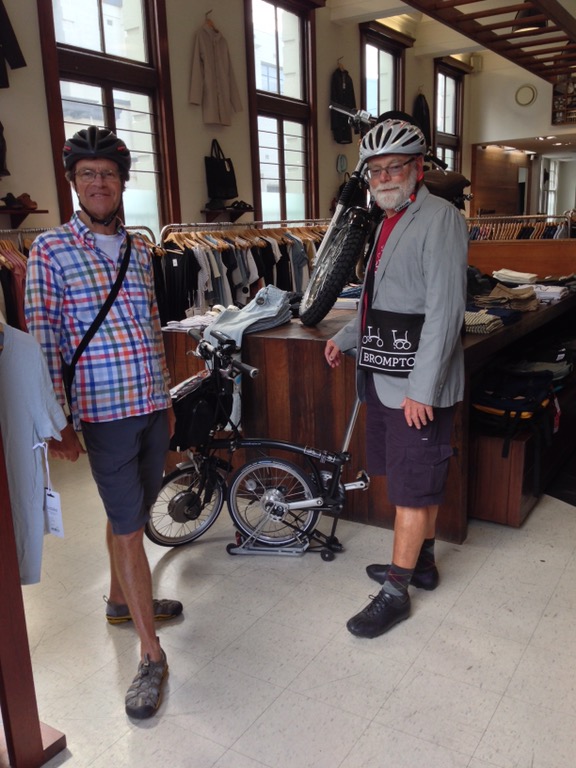 The Sydney Suit Ride sounded quaint; the smartest riders in town, rolling through the city – & followed by a free lunch! As befitting a Ride in a suit, the pace was gentle & the territory was mostly hill-free. About 40 bikes attended, including 4 Bromptons, with quite a mix of commuting choices – & about one third e-bikes! The route was from Surry Hills through to Observatory Hill & return, mostly along cycle ways & paths. The only struggle was getting through all the bicycle traffic lights on the all-too-short greens? Such a shame that the priorities lay with keeping motorists happy, rather than allowing cyclists to flow along? Thanks to BicycleNSW for the great weather/organising/shepherding/food. 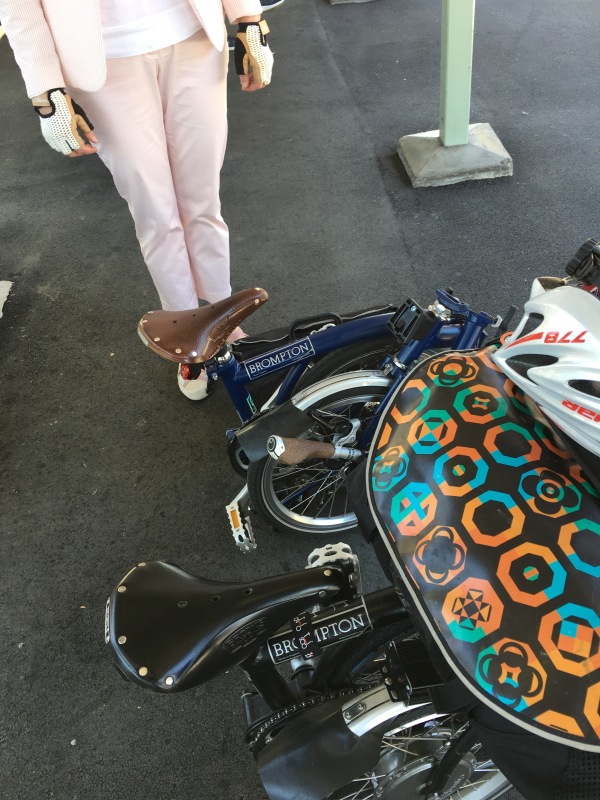 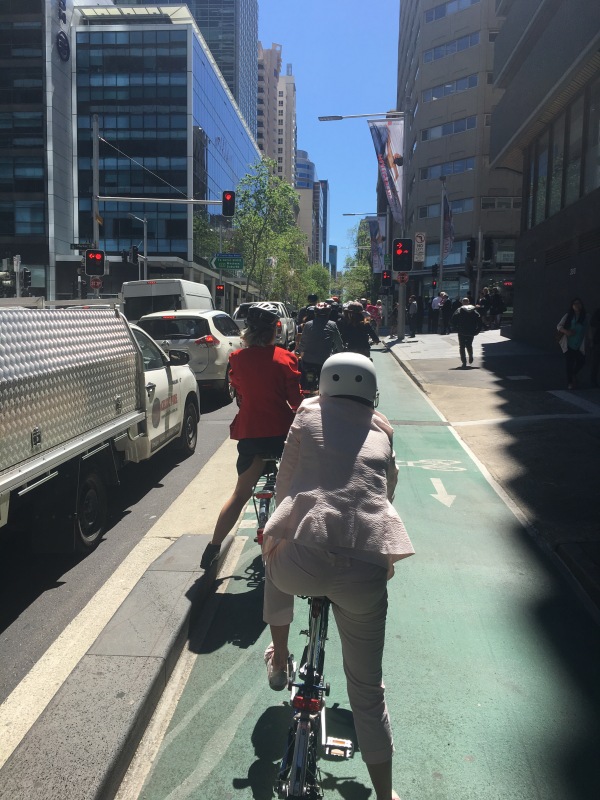 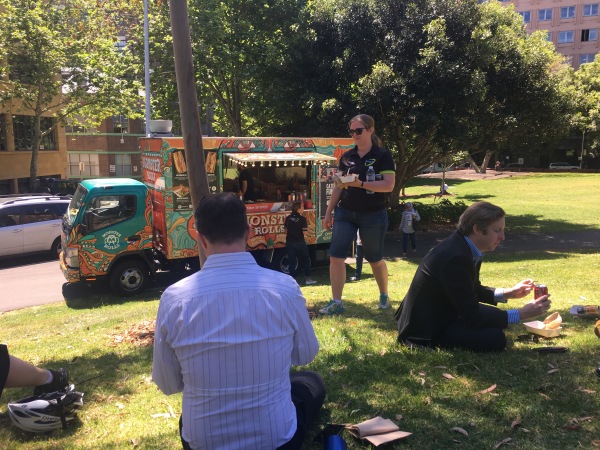 Attending the Spring Cycle Ride (along with 8000+ bikes sending their way from North Sydney via the Harbour Bridge to Olympic Park?) was always “a maybe” but while riding in the Olympic Park area a couple of days before, my mind was made up. The Ride preparations were underway, sign-posting to guide riders through the winding cycle paths & suddenly my enthusiasm was for a quiet ride with a sea breeze (& out of the hot part of the day?). Accordingly, we headed to the Northern Beaches & undertook our little “Narrabeen Lagoon loop & Deewhy gelato” adventure; much more relaxing? 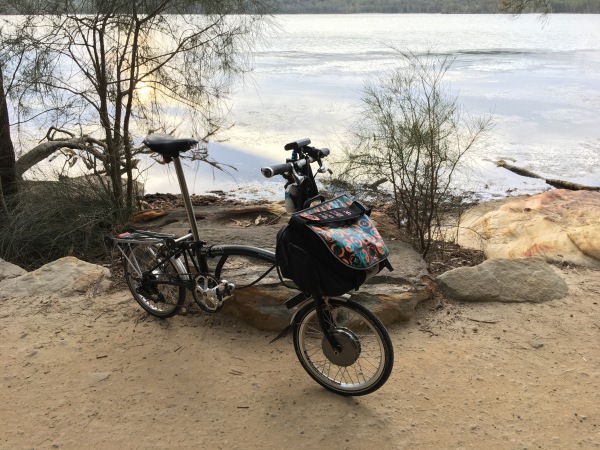 My last Rides Festival event wasn’t even a ride, but a train trip to the city for a talk named, “How the Dutch do it” (well, shopping & a long lunch also got fitted in). Cycling in the Netherlands as described by a visiting Urban Planning Professor was quite enlightening. It seems that “Build it & they will come…” wasn’t how things happened, but more like “When systems don’t cope anymore, build it…” (& continue the cycle Ad infinitum?). Amongst the stats I recall figures such as “500,000 bike racks, 600,000 bike journeys” & some quite telling pics of overloaded parking stations? (you know the sort of thing; human nature with a full parking station leads to, “I’m late, that’ll do”?)

I can’t finish this blog post without thanking Ralph-e for such wonderful support for all these rides. I’m sure I can say, “I couldn’t have done it without you”? It’s difficult to express how brilliant my riding has become with this e-bike setup. For now I’m having to re-learn how to deal with hills while also comprehending the e-bike potential. Please keep watching.

My new ebike world is progressing nicely. So far, rides on Ralph-e (a recent electric conversion of my Alfine 11-speed Brompton) have totaled about 200km along mostly coastal bike paths. Mrs Aussie has laboured somewhat while I basically cruised (the reverse of our previous ride efforts for some years?). I coped with savage headwinds & stiff hills without much concern, although a certain amount of guilt nags away (for a while?).

My technicalities recipe is to take one Brompton, add a 250watt Crystalyte motor to the front wheel & mount a 20amp GrinTech controller above the rear of the front mudguard… 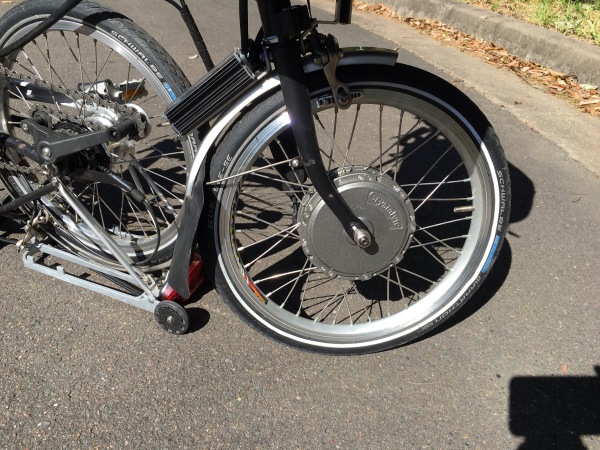 Fit a TDCM torque sensing bottom bracket, with a hole drilled in the bottom of the frame for the cable connection… 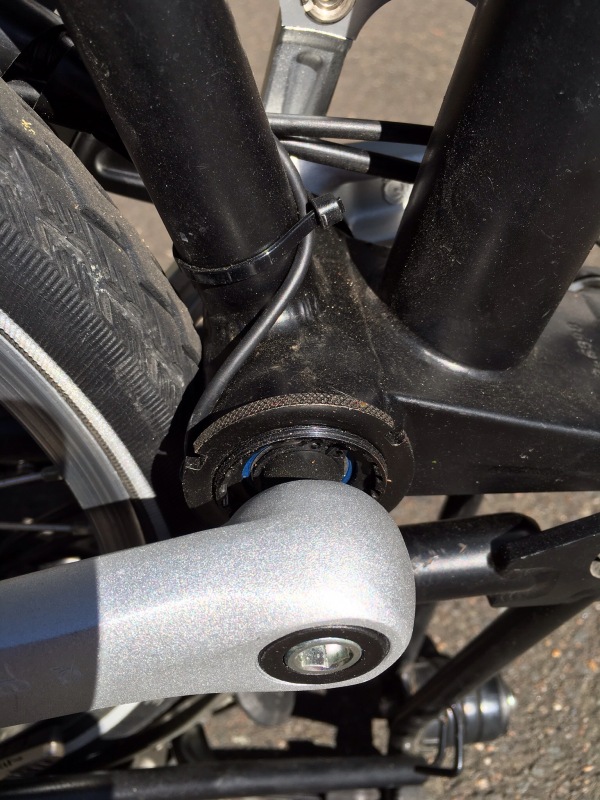 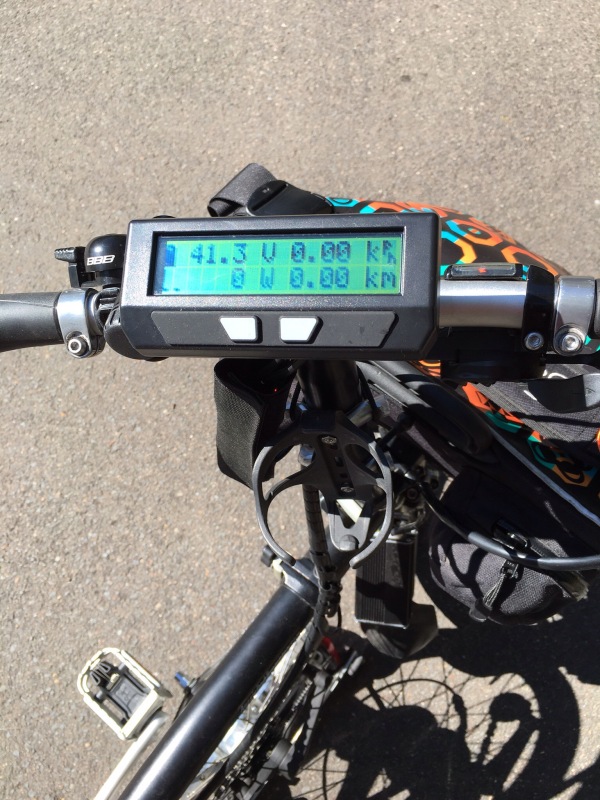 …and finally, include a battery (in my case, an eZee Lithium-manganese 36volt 15AmpHour, i.e. 540WattHours) within a Brompton bag at the front… 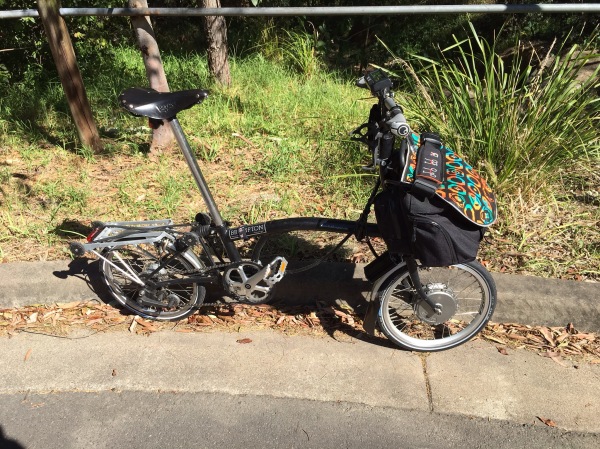 The whole experience has been an illuminating & exciting learning curve, from the ride characteristics (sounds, power-off lag (especially on slow-speed maneuvers) & smooth power) to the technical data available from the computer system (up to 11 displays for ride, motor power, human power & energy data). Choosing to “go electric” was a concern for an appropriate ride experience (brilliantly answered?), a quality product (very satisfied, even considering the likelihood of an eventual Brompton ebike release?) & a deciphering of all manner of ebike jargon & implications (eg cost, weight, power & range?).

The info & stats from the computer display has provided insights & understanding for my ebike adventure. Rather than the experience of observing a series of lights representing battery level or power levels, while riding I can see the exact consumption from the battery (amphours), my output level (human watts), economy (watthours consumed from the battery per km ridden), the usual bike computer data – & other stuff I’m still getting my head around. However, determining the all-important battery range is still a work-in-progress while my economy level has been improving with re-configuring & fine-tuning for power output. So far, a range exceeding 100kms (depending on the demands of the ride?) is on the cards – although probably not on my agenda?

Brompton weight was something I could estimate pretty accurately (about 4kg?) before the conversion although battery weight was an unknown while I was unsure what battery size to use. The 540Wh unit I decided on is great for range but adds another 4kg in weight. As usual, front luggage weight on a Brompton has virtually no affect on ride handling. I’m becoming quite proficient at folding Ralph-e with the front bag in place & the folded handling has been helped with the inclusion of a rear rack.

The final word on my Brompton ebike experience to date: priceless!