Wanting to start 2014 with a little mid-week break away from the heat of Sydney, we thought that taking the Tardis (our VW T5 Campervan) to the coast for a few days was going to push us into the school holiday crowds that we would normally avoid. So instead, we headed for the Blue Mountains to take advantage of that possible 5-10° cooler environment? Also, a chance to check out how the recovery from the recent bush fires was going? The likelihood of getting a site at BM campgrounds was slim so we headed further west to Lithgow for a couple of days (much quieter & cooler). Off for a ride the next day, we took in Blast Furnace Park, a memorial to the Steel-making days in Lithgow.

Stopping for lunch in town & parked at a cafe & did our mini-security act of folding the handle bars. A “resident laptop user” in the cafe noted our bikes as folders but thought they were recumbents; reminding me of a lady on a train that thought my folded Brompton was a folding wheelchair? 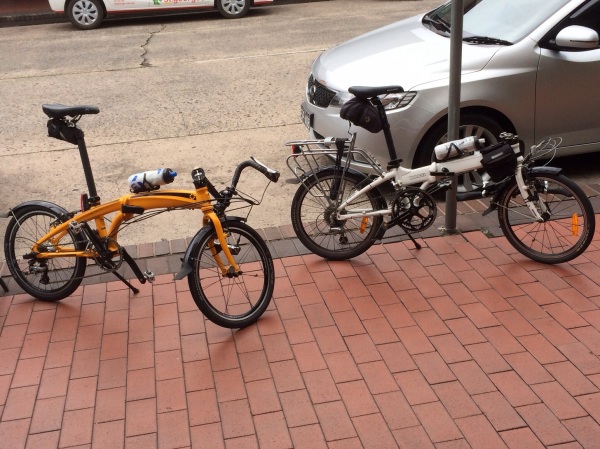 Our stay in Lithgow took in more of the Coal & Steel historic sights & then it was time to move on – even for no other reason than escaping the overnight single-figure-degree temperatures? (A lot cooler than we were expecting.) Heading for Mudgee we detoured via the Kandos/Rylstone road & came across a great little cafe occupying the old railway station at Kandos.

Settling in at Mudgee, we reflected on the current temperatures: Sydney 30+°, Lithgow 12°, Mudgee 24° – a good decision!

Strolling the short distance into town for dinner, the old saying came to mind, “Red sky at night, a farmer’s delight”?

Awoke the next morning to see some funny little bubbles all over the van & awning? I suppose farmers may have been delighted to see some rain but it wasn’t what I was expecting. Oh well, good excuse to settle down with some wine-tasting & lunch at a winery?