We discovered a lovely bit of cycling road recently (well, particularly lovely for me as it seemed to have no major hills?). It covers about 10-12km along a river valley on a non-through road. It is well sealed, narrow, winding & undulating & as a round-trip of about 20km through nice scenery, it would seem to be ideal for my Brompton escapades?

Unfortunately, I have yet to ride along it, for our discovery was while on an outing with the Tardis to give it a Sunday run on a cool day that was expected to wind up becoming very wet. As part of the day out, we were going to attempt to locate an orchard near Wiseman’s Ferry that was offering “pick your own” Mandarins. So we headed out & had a pleasant time relaxing around the Hawkesbury River locality, & after some lunch we turned back to the task of locating the farm & orchard.

Immediately we turned onto the road we started encountering vehicle traffic coming in the opposite direction. There were a number of properties along the road & with the afternoon getting on, we continued along thinking the traffic was purely coincidental? However, the traffic became more of a flood; convoys of cars all heading in our direction? With the narrow & winding road, we were continually moving over or stopping to await a gap in the traffic before we could continue along. At some point along the road we came to the conclusion that the traffic must have been coming from the farm, as there was little else along the dead-end road. Getting toward the property we were seeing “count down” signs to the farm & concluded that we should arrive prior to the closing time, so should keep going & would likely have the place to ourselves?

Eventually we arrived at the farm, to be confronted with fields of cars (hundreds?) parked near acres of citrus trees. Boy, was picking your own fruit popular?! After being directed toward a field to park, we made our way to the sheds on the property & learned the ropes of obtaining our fruit: a deposit paid for some shears, a map display of where the various Mandarin varieties were located, some rules for picking (snip the stems & don’t pull at the mandarins, no throwing of fruit – presumed to be aimed at the kids? – etc, etc), a bucket for the fruit (we couldn’t see ourselves being able to consume multiple bucket-fulls?) & away we went. Out into the orchard, easily filling our bucket from countless trees heavily laden with fruit; all while carefully stepping between discarded peel & damaged fruit. With the plan of paying for weighed buckets of Mandarins, I suppose there was something in the rules about “no eating of fruit” but it hadn’t been heeded, judging by the amount of peel discarded? As for “no throwing of fruit”, kids will be kids?

Our picking went off admirably, with “just a little” tasting (essentially to verify the tree quality?) & then back to the sheds to have our booty accounted for. A trudge back to the Tardis & then wending our way back along a still busy narrow, winding road & then returning along the main road to home; a lovely day out! 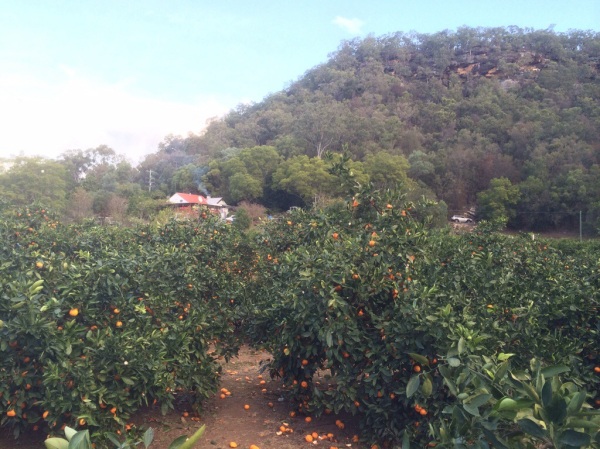 As for the discovery of an ideal cycling outing for me, time will tell. We shall have to carefully investigate the various picking seasons if we hope to get the road to ourselves.